Nurses ‘off their faces’ after accidentally eating cannabis cake

Nurses were reportedly “off their faces” after a “nice old man” handed them a cake laced with cannabis as a thank you present.

Police were called to Warrington Hospital in Cheshire after staff ate the red velvet sponge that was spiked with the class B drug.

A grandfather, who wanted to thank the nurses for their care of a relative, is said to have been unaware of the cake’s additional ingredient.

He had taken it from his grandson’s 18th birthday party before presenting it to nurses.

Hospital bosses are said to have denied anyone consumed the cake, but Cheshire Police have confirmed it was eaten on the premises.

A member of staff, who did not want to be named, told the Manchester Evening News that “three or four” nurses were “off their faces” afterwards.

They added that the staff members were also feeling “relaxed” after their slices of cake.

The hospital worker said: “They were eating the cake and then the next minute the staff were all off their faces.

“It was brought in by a nice old man as a thank you, but it was full of funny stuff and had them all relaxed.

“There was no impact on the patients whatsoever, but they all knew something was wrong, so the police were called in.” 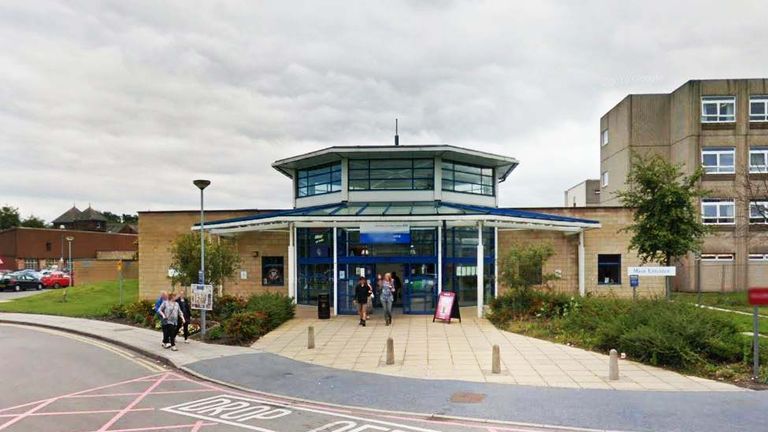 Image: Nurses were said to be ‘off their faces’ at Warrington Hospital

Officers tested the sponge and confirmed it contained cannabis, making it what is often referred to as a “space cake”.

A Cheshire Police investigation found the grandfather had no idea what was in the sponge and was shocked to discover the disruption on the ward.

:: Listen to the Behind the Headline podcast on Apple Podcasts, Google Podcasts, Spotify, Spreaker

Warrington and Halton Hospitals NHS Foundation Trust is said to have conducted a 72-hour investigation after the cake was eaten on 27 May.

Chief nurse Kimberley Salmon-Jamieson said: “A visitor brought in some birthday cake from their relative’s 18th birthday which was offered to our staff as a thank you for the excellent care that a patient had received.

“The visitor was completely unaware that there was cannabis in the cake.

“Only one member of staff ate a small piece of cake, did not suffer any ill-effects, did not care for any patients afterwards and finished their shift.

“On noticing a strange odour from the cake senior staff notified Cheshire Police who removed and subsequently destroyed the cake.”

A Cheshire Police spokesperson said: “Officers received a report on Monday 27 May that a cake which was suspected to contain drugs had been brought into Warrington Hospital by a member of the public and given to staff.

“Following an investigation officers determined that the member of the public who had brought in the cake was unaware of the content of the cake as it had been left over from their grandson’s birthday party.

“Officers have now spoken to all parties involved and given some strong words of advice.

“The case has now been closed and the cake has been destroyed.”