‘A scarecrow… a Smurfette’: Melania statue unveiled near hometown

A life-size wooden statue of US first lady Melania Trump has been unveiled in her birth country of Slovenia, but not everyone is pleased with it.

The sculpture was erected next to the Sava River in the village of Rozno, around 8km from Mrs Trump’s hometown of Sevnica.

It was commissioned by Brad Downey, a Berlin-based American artist, and sculpted with a chainsaw by local folk artist Ales Zupevc. 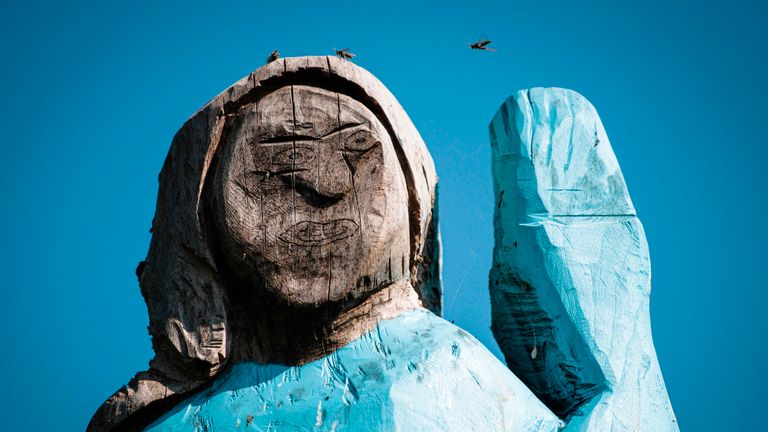 Image: The likeness is questionable to that of the first lady

Mr Downey already has an exhibition in the capital Ljubljana, which explores the first lady’s Slovenian heritage, and this new piece serves as an accompaniment to it.

Although the statue is dressed in the pale blue wraparound coat that Mrs Trump wore at her husband’s inauguration as US president, it appears to show very little likeness to the first lady – promoting some criticism from locals.

One resident said: “It doesn’t look anything like Melania… It’s a Smurfette.”

Another said: “It’s not okay. It’s a disgrace. That’s what I have to say.”

Others on social media branded it “a scarecrow”.

Even Mr Downey’s gallery appeared unsure how to interpret the wooden FLOTUS when issuing a leaflet for the gallery.

“Perhaps we are simply trying vigorously to make sense of things that might only be a slapstick prank… who knows?” it read. But Mr Downey defended his art work, insisting it was “absolutely beautiful”.

He said he wanted to “have a dialogue with my country’s political situation” and show Mrs Trump’s status as an immigrant who is married to a man who has pledged to reduce immigration in the US.

Mr Zupevc, the sculptor, was born in the same hospital and in the same month as the first lady and works mostly as a pipe-layer. Image: It is dressed in Melania’s inauguration outfit

As part of a short film for the exhibition, Mr Zupevc highlights the inequalities between them, saying: “Let’s face it, she owns half of America, while I have nothing.” Image: The statue forms part of an exhibition about the first lady